AUTHENTIC CARPET OF LIGHT AND REFLECTIONS, IT ENHANCES THE FURNISHING GIVING THE PLACE WARMTH AND SOFTNESS AND REVEALING ITSELF AN ELEGANT AND EXCLUSIVE ELEMENT OF THE INTERIOR ARCHITECTURE. 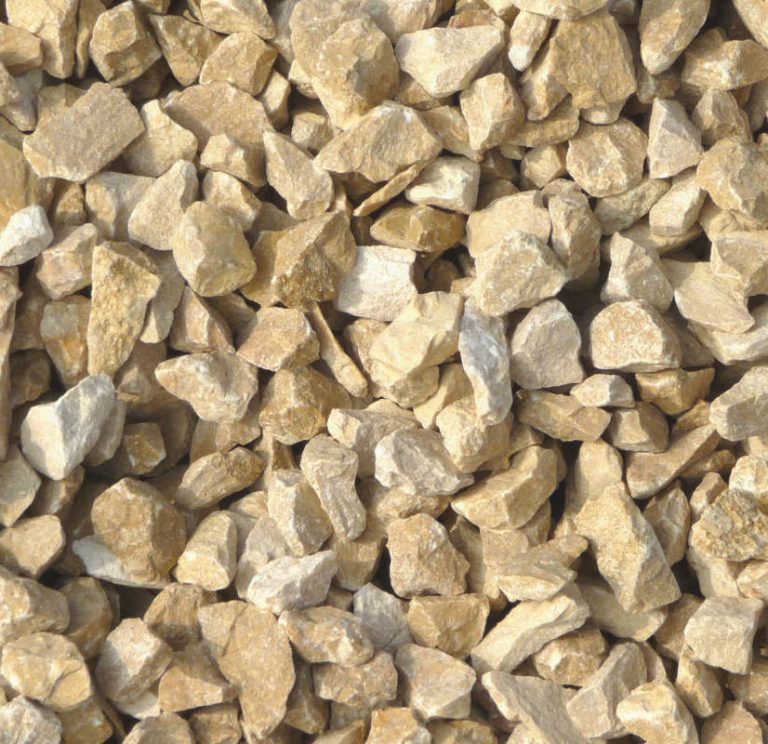 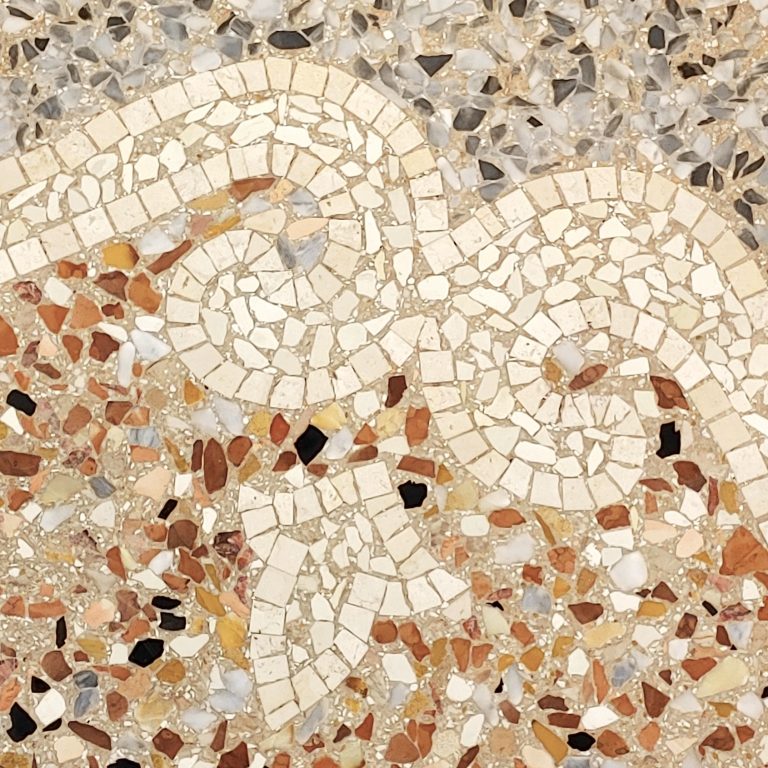 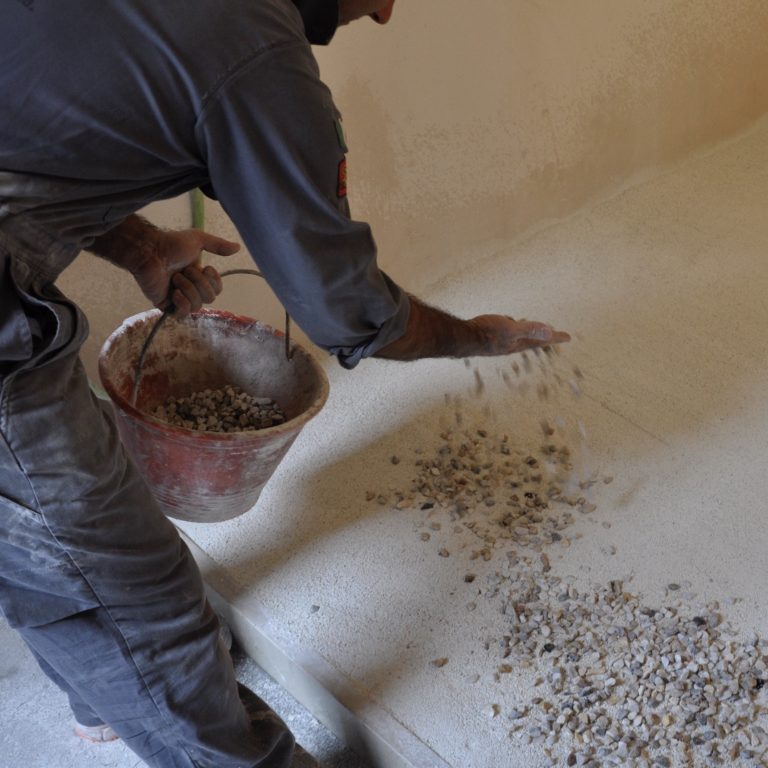 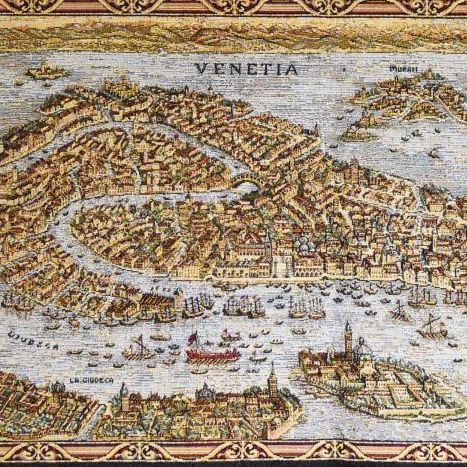 … MANY OTHER MARBLES ARE WAITING FOR YOU !

We carry out an inspection, accurate and punctual, to assess the feasibility of the operation and the specific nature of the construction site in order to formulate a clear and personalized estimate.

A wide sampling of Venetian floors and the opportunity to build new ones, on request, from raw non pre-mixed materials, are the starting point for a customized terrazzo, a unique and unrepeatable solution.

3. Preparation of the screed

for lime floors we realize the coat starting from the planks. For cement floors, we provide assistance on the characteristics of a screed, not technical, not suitable to support the terrazzo

The laying of terrazzo provides the formation of a layer of concrete, about 1 cm thick, formed by the binder(cement or lime) and thin grit in volumetric reason of two parts of grit and three parts of binder.

afterwards it is performed the “semina“, tossing different sizes of marble chips. The skill of the terrazzo master is to let them slip from his hand, in a homogeneous and compact way, up to cover the entire surface.

Once the sowing is finished, the master manually wets the surface to obtain a consistency that will allow the deep insertion of the chips in the following steps of rolling and beating.

The roller is a toolweighing about 70 kilos that, with numerous crossed passages, compresses and levels the granulate. The master’ skill in rolling allows him to obtain the homogeneity of the seed avoiding any waves on the floor.

This procedure involves the use of a roller and of a special iron tool called “fero da bàter” on completion of the rolling for the parts of the cement terrazzo that the roller does not reach.

when the binder is mature, the surface is roughed with a manual tool called “orso“, or with sanding machines, through a series of steps with a higher abrasive grain.

10. Pointing
The roughing brings to surface physiological micro-holes, which are closed through the stucco work filling the entire surface.

When the stucco is mature, the lime floor is polished manually with natural oil. For the cement terrace sanding machines, abrasives, diamond wheels and polishing products are used to obtain the desired polishing degree.

The “floors crystallization” gives greater resistance to abrasions, ensuring a more durable sheen. This finishing is the result of continuous research and application of innovative processes of our company.

The terrazzo is inextricably linked to the foundation and urban evolution of Venice whose homes, in continuous adjustment, recall the requirements of the stability and elasticity of the vessels. Its origins lie in ancient Greece and Rome, but it is not clear how they could concentrate and diffuse themselves in Friuli, in the early Christian and Byzantine era.
In the period between VII and XIII century the floors of the Venetian houses could be of “antinelle“, a particular kind of brisks, arranged in a herringbone pattern on the ground floor and the upper floors of wooden planks, larch and fir, covered with “cocciopesto“, (Opus signinum) with the surface “smeared ” with red, yellow or green lime. Around 1400 the terrace reaches a high degree of sophistication: marble, colored chips, mother of pearl embellish the surface. From “wooden town” Venice turns into “city of stone”.
The terrazzieri organize themselves in Schola rather late in 1586 and only in 1590 appear the first illustrations of the installation and working tools.
Between 1600 and 1700 the art spreads in Milan, Genoa, Bologna and new decorations and motifs are processed.
From 1800 up to now, the “Terrazzo alla Venziana” hasn’t changed much; materials and machinery have evolved, as well as the inclusion of glass, murrine and other precious items, but the procedures for implementation, the gestures of master terrazzieri, and the processing times have remainedalmost unchanged. 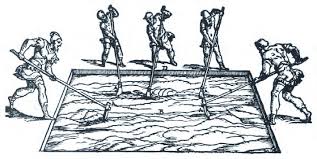 A ducat was the fee of “benintrada”, ie entry to art, which in 1586 was required by general legislation, “Mariegola” , to become part of the “Schola of Terrazzeri“. The copy we still have, drafted in 1786 is now treasured in the Museo Correr. 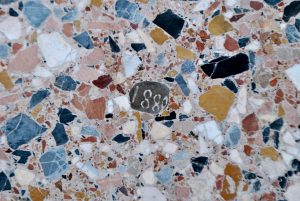 Working in the old Venetian dwellings, we discover small details that can escape even the eye of the most expert visitor. In 2014 during the restoration of the Loggia of Palazzo Ducale, we discovered an insert dated 1889, the year of manufacture of the floor. 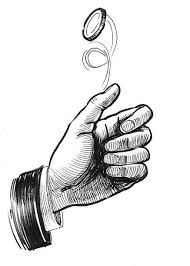 A profane eye can hardly distinguish an original terrazzo in lime from a newer concrete. To the touch the first is hotter than the second.
A curious method is to drop to the floor a 50 cent coin, the tradition wanted the 100 Lire of the old coinage. If the terrace is in lime the currency will spring back a little, because its rebounding energy is absorbed from the terrazzo. 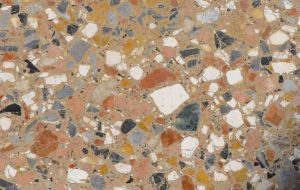 Another curious and well hidden detail is a composition, that explicitly refers to the tricolor flag. We can assume it has been deliberately inserted in the sowing, since in the rest of the pavement you cannot find the essence “Verde Alpi” used for the green of the small composition. No other tricolor flags have been found in any portion of the floor.

If you can dream it, you can do it. 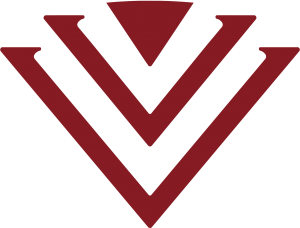